Responsibility In a Nuclear Age

J. Robert Oppenheimer (April 22, 1904 – February 18, 1967) was an American theoretical physicist best known for his role as the director of the Manhattan Project, the World War II effort to develop the first nuclear weapons, at the secret Los Alamos laboratory in New Mexico. Known as “the father of the atomic bomb,” Oppenheimer lamented the weapon’s killing power after it was used to destroy the Japanese cities of Hiroshima and Nagasaki. Famously, after the war he recounted his impressions of the bomb’s invention by quoting the Bhagavad Gita whilst trying to hold back tears on television.

In his book Heresies, John Gray reminds us that science is not the answer to mankind’s existential woes or spiritual shortcomings, nor an advance in its will to do good either; it merely amplifies our capacity to express these. Robert Oppenheimer died of throat cancer at age 62 in Princeton, New Jersey, in 1967. The video above should remind us of the responsibility mankind has in handling the fruits of scientific enterprise. The 42nd anniversary of the bombings of Hiroshima and Nagasaki are coming up in August. 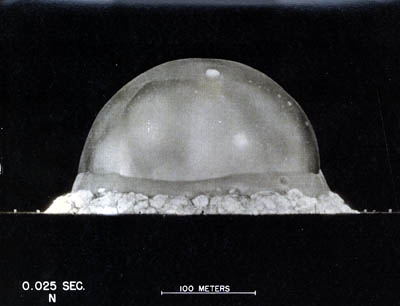 The picture above is a photograph taken of the first nuclear bomb test at The Manhattan Project. It was named Trinity by Oppenheimer.

In a 6-part series called Pandora’s Box, film-maker Adam Curtis has explored the continuing desire of mankind to fall for the illusion that scientific progress equates to progress for mankind on other levels. The theme of this unwarranted belief in science is explored in the last episode of the series, “A is for Atom”, in which Curtis examines mankind’s custody of nuclear capacity and the hope its discovery brought.